A lot of people don’t realize just how important it is to have an efficient electric insect killer in the house: how long can you hope to simply put up with the pests or keep trying you luck with ineffective products like repellant creams and sprays? The insect problem can be extremely annoying, not to mention dangerous to health and sanitation, if it’s not taken care of properly.

If you’re looking to learn how to kill mosquitoes and other insects on your property, you’ve come to the right place. Today we’re going to review the Dyntrap Insect Trap. 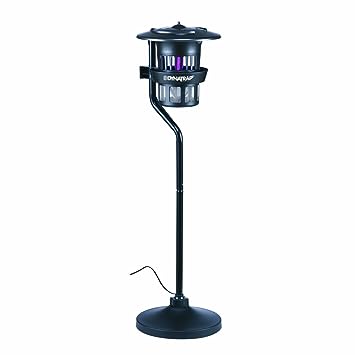 This electric insect killer uses a four-pronged approach to get rid of flies and other insects. To begin with, a florescent bulb radiates a UV light that draws in the insects. Next, Ti02 titanium dioxide-coated shell emits CO2, and this is especially effective at attracting mosquitoes. The Dyntrap Insect Trap also incorporates a water tray to draw in the egg-laying bugs. And finally, the rotary fan creates a vacuum that traps the insects in the capture tray. Once trapped, the insects dehydrate and are thus killed.

The Dyntrap Insect Trap has seen mixed reviews amongst buyers so far. Many users experience little to no results with this pest repellermachine. However, it is my opinion that this is a complaint that is easily resolved. You need to allow the electric insect killer some time to actually start showing results. It can take up to a day or two before it actually begins to cause a noticeable decrease in your local insect population, especially if you live in an area with a swamp/ wetland in the vicinity. If you’re hoping to spend some time in the outdoors or host a gathering, switching on the Dyntrap Insect Trap a few minutes in advance will do you no good: you must leave it running for a minimum of 12 hours before you can safely spend an extended period of time outside without all sorts of pesky pests bothering you. It’s a machine, not magic

Another difficulty that some people have faced with the electric insect killer is that the water in the trough evaporates/ dries up quickly. If you’re not keen on having to refill it often, you might see this as a bit of a disadvantage. However, if you’re located someplace that sees a fairly frequent amount of rainfall, that should take care of the issue for you. Other than that, it’s a fairly small inconvenience and given the kind of results you get, I think it’s definitely worth the effort.

Now, let’s move on to the benefits of using this electric insect killer.

For starters, an UV insect killer is a lot more sanitary, safe and healthy as compared to most traditional bug zappers. No pesticides, fumes or odors are released on to your property, so you don’t have to worry about any harm coming to you or your loved ones.

Secondly, the pole stand makes this insect killer lamp rather easy to use: you can just pick it up and position it wherever you want on your property. My advice would be to keep it at a place where you’ve noticed a lot of bugs frequently, especially if it’s on the outer edges of your property: this way, you can prevent the insects from even coming near your house.

Another advantage of using this electric insect killer is that it doesn’t need an attractant chemical/ product like propane to lure and kill the insects. So, the only thing you need to spend your money on is the machine itself. This is definitely a win as compared to many other insect killers in the market that are essentially useless without the attractant. If you’re looking to save money or you don’t like the idea (and odor) of attractants, I would recommend an electric insect killer like this one.

Watch this video to see how dyna trap works:

WHAT DYNA TRAP CAN CATCH?

Mosquitoes are small midge-like flies. Most are a nuisance because they suck blood from vertebrates, many of them attacking humans. In feeding on blood, various species of mosquitoes transmit some of the most harmful human and livestock diseases. Some authorities argue, accordingly, that mosquitoes are the most dangerous animals on earth.

Asian Tiger: Located throughout the Southeastern part of the country, but also as far north as Minnesota, this is one of the most dangerous mosquitos. The eggs of the Asian Tiger mosquito can survive harsh winters which increases their potential to carry harmful diseases. The Asian Tiger mosquito is unlike other mosquitoes due to the fact that it is most active from 10am to 3pm not at dusk and dawn.

Aedes Aegypti: Also known as the Yellow Fever Mosquito, this breed is very resilient and does not even need water to lay their eggs. The eggs simply lay dormant until there is rainfall and then they hatch. According to the Center for Disease Control if you were to eliminate all of these mosquitoes, within two weeks after a large rainfall, they could be back to the same population size as before.

Anopheles is the species of mosquitoes that is responsible to for the spread of malaria. These mosquitoes are found on every continent in the world except Antarctica. Even where malaria has been eradicated there is a chance for reintroduction from these mosquitoes.

Culex Quinquefasciatus: Commonly known as the Brown House mosquito. The Brown House Mosquito is a significant domestic pest in urban areas, and will often bite indoors.

Don’t be deterred by the list price of DYNATRAP – this Electric insect killer can be yours for CHECK BELOW FOR ACTUAL PRICE NOW( at the time i write this review). We’re talking about a savings of as much as $xxxx – that’s a whole 42% off of the original price! Please check actual price on amazon below: